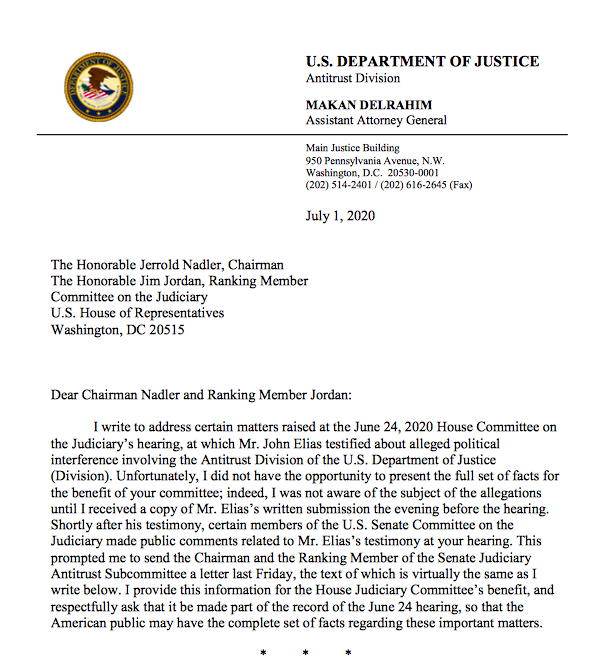 Makan Delrahim, top antitrust official at the Justice Department has pushed back on the testimony his former chief of staff delivered to Congress last week.

Makan Delrahim wrote  a letter  on Wednesday to the top Democrat and Republican on the House Judiciary Committee. In the letter, Delrahim said John Elias’ testimony was “misleading and lacks critical facts.”

Elias testified that Attorney General William Barr called Antitrust Division leaders to his office for a meeting and then ordered them to scrutinize mergers of marijuana companies because he himself held personal animus toward the industry. Delrahim wrote in his letter, meanwhile, that the division asked for the meeting “for the purpose of resolving significant policy questions at this complex intersection of criminal and civil law enforcement,” reported Politico.

“Notably, the federal antitrust agencies had no prior experience — let alone subject matter expertise — in the cannabis industry,” he wrote.

The letter also addressed Elias’ testimony about the Antitrust Division’s review of an arrangement among auto manufacturers regarding compliance with California’s emissions standards. Elias said the Division leadership directed staff there to start an investigation into the arrangement the day after President Donald Trump wrote on Twitter that he thought it was terrible. Delrahim’s letter, meanwhile, said he first asked staff to analyze the arrangement several weeks before Trump tweeted about it.