In China, exclusive dealing is a particularly important antitrust concept:

This article provides an overview of exclusive dealing-related cases in China, analyzes the application of the relevant provisions of the Chinese Anti-Monopoly Law, and shares our observations on the relevant market and enforcement trends.

I. Overview of Exclusive Dealing Enforcement in China 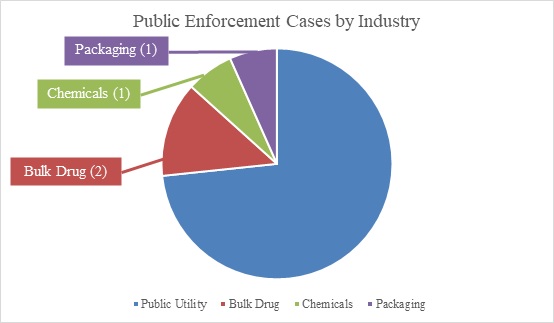 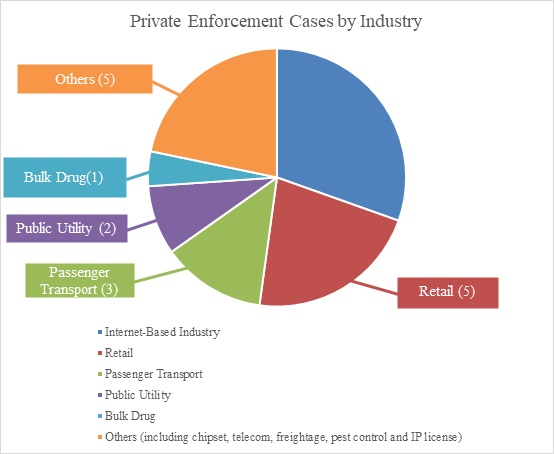 Another notable finding is that all these exclusive dealing cases cited the Anti-Monopoly Law at Article 17 (abuse of dominance) while none cited Article 14 (monopoly agreements), the rationale behind which we explore in the following section.

There exists a large number of cases concerning exclusive dealing arrangements in which the Anti-Monopoly Law is not invoked. Consider the food delivery platform market: according to PaRR, among 22 cases in which local competition authorities imposed penalties against food delivery platforms between 2015 and 2019, seven (32 percent) were imposed under Article 35 of the E-commerce Law; six (27 percent) cited local anti-unfair competition regulations; and six (27 percent) were based on the Anti-Unfair Competition Law, among which five cited Article 12(2) of the amended Anti-Unfair Competition Law – an internet-related provision.3 In our view, local authorities may prefer to rely upon laws and regulations other than the Anti-Monopoly Law (especially in cases concerning “new economy” industries), because these provisions do not require the determination of dominant market position and/or rigid competition analysis and because these provisions also tend to be less punitive and thus invite less resistance from alleged violators.

In contrast, Article 17 of the Interim Provisions on Prohibiting Abuse of Dominant Market Positions (《禁止滥用市场支配地位行为暂行规定》), promulgated by SAMR and dated June 26, 2019, appears more stringent in regulating exclusive dealing, as such conduct by a market dominant undertaking is prohibited unless it can demonstrate a “legitimate reason.” The interim provisions provide examples of legitimate reasons for exclusive dealing which relate more to the legitimacy of the motives behind the conduct rather than the overall harm to competition the conduct may cause, such as the necessity to satisfy product safety requirements, to protect intellectual property rights, and to protect transaction-specific investments. This observation is echoed in official guidance on the provision.6 However, Article 20 of the Interim Provisions on Prohibiting Abuse of Dominant Market Positions runs contrary to this notion and opens the door for objective analysis of the conduct’s effect on competition by providing that consideration should be given to the impact on economic efficiency and development when evaluating whether legitimate reasons exist. This issue is important because dominant firms often implement exclusive dealing arrangements solely for the purpose of fiercely competing for customers with their competitors, which acts to intensify competition in the relevant market and therefore should not be condemned, but rather encouraged.

In practice, the Chinese competition authorities have always included in their penalty decisions a section discussing anti-competitive effect. It is unclear, however, whether such a section is necessary for a decision to withstand a challenge in administrative litigation. In Yutai v. Hainan Price Bureau,7 the Supreme People’s Court held that the antitrust enforcement authority needed not prove anti-competitive effect in its decision in a resale price maintenance case and, rather, that the business operator bore the burden of proving its conduct was exempted under Article 15 of the Anti-Monopoly Law. Courts could adopt a similar position where an undertaking challenges an administrative penalty decision rendered against its alleged abuse of market dominance. It is thus conceivable for the Chinese competition authorities to increase enforcement of exclusive dealing arrangements while conserving administrative resources by limiting economic analysis of the anti-competitive effect in each case and simply evaluating whether the undertaking’s reasons for the arrangement are indeed legitimate.

In recent years, smaller companies have learnt to use the Anti-Monopoly Law as a cudgel when faced with exclusive dealing arrangements or when such arrangements hinder market entry or expansion. For example, Tmall has faced lawsuits brought by both merchants on its platform and competing platforms for its alleged “choose one of two” platform exclusivity behavior; Starbucks was sued by Luckin Coffee for its exclusivity terms with shopping malls and vendors;8 and food delivery platforms have received complaints from restaurant associations for mandating exclusive agreements. These litigations and complaints, however, have resulted in only a few publicly disclosed judgments or administrative decisions citing the Anti-Monopoly Law. That said, most claimants have benefited from their bold actions, either by winning better terms or by drawing public attention.

At the same time, larger companies have developed strategies to reduce legal risk in relation to exclusive dealing arrangements. We have observed companies taking the following protective measures:

Such protective measures could indeed make it more difficult to apply the relevant antitrust provisions. Consider, for example, Article 17 of the Interim Provisions on Prohibiting Abuse of Dominant Market Positions, item (a) could still be deemed violative as an “indirect restriction,” but it is less clear what level of indirect restriction should be penalized; item (b) calls into question whether Article 17 could apply, given that the restricted party can still deal with third parties;9 and item (c) provides within the agreement potentially legitimate reasons for the arrangement.

We expect enforcement to continue in relation to exclusive dealing conduct in the public utility and the bulk drug industries. Recent examples of enforcement actions in 2020 include Calcium Gluconate Injection,10 in which SAMR punished Kanghui’s exclusive dealing arrangements with upstream manufacturers; and in Shanxi Jianke11 and Shanxi Xinzhou Gas,12 in which the Shanxi competition authority criticized the operators’ exclusive dealing agreements with their downstream real estate enterprise customers.

As for internet-based industries, the government has long followed a “tolerant and prudent” policy, presumably to encourage the development of such nascent industries.14 As a result, the competition authorities have rarely invoked the Anti-Monopoly Law against internet platforms; rather, they have preferred to resolve disputes through various forms of mediation, e.g. warnings,15 summonses for commitments,16 or government-mediated settlements.17 That said, internet-based industries are quite active and also generate probably the most complaints from business operators as well as consumers. Such complaints are typically more visible due to widespread media coverage. Therefore, we have seen SAMR gradually move toward a more proactive approach. At a seminar in November 2019, SAMR made clear its views that exclusive dealing conduct is capable of harming platforms, vendors, and consumers and violating the basic idea of an open and shared internet, and warned internet platforms that it would maintain close scrutiny of their behaviors, open investigations when appropriate, and that platforms should expect severe punishment where such behaviors are deemed abusive.18 In July 2020, SAMR further caused 20 major internet platforms to sign a “commitment letter,” where they committed “not to force venders on their platforms into ‘exclusive partnerships’ or ‘exclusive licensing’, and not to impose unreasonable restrictions or conditions on vendors on their platforms in respect of choosing platforms.”19 These strong moves by SAMR could signal future enforcement actions, as similar patterns have been observed in the bulk drug industry and the memory chip industry, among others.

4 See Article 13 of the Interim Provisions on Prohibition of Monopoly Agreements (《禁止垄断协议暂行规定》) promulgated by SAMR and dated June 26, 2019.

6 “If the undertaking’s restrictive dealing conduct is not for the purposes of excluding or restricting competition, but for legitimate business considerations, such conduct cannot be deemed as an abuse of dominant market position.” See Knowledge Book of the Anti-Monopoly Law of the People’s Republic of China (《<中华人民共和国反垄断法>知识读本》), the Anti-Monopoly Commission of the State Council, P130.

9 The Eastman case could be a good reference in this regard, in which the exclusive agreements at issue fixed about 80 percent of consumer demand.