This article focuses on the five conditional approvals issued by the Chinese antitrust authority in 2019. There five such cases, i.e., KLA-Tencor/Orbotech, Cargotec/TTS, II-VI/Finisar, Garden Bio/DSM and Novelis/Aleris. This article analyses these cases from both procedural and substantial perspectives. The paper concludes that, in terms of procedure, one of the most significant features is the long and complex review process. In particular, it is important to assess whether a case in fact qualifies for the simplified procedure before filing. From a substantive perspective, the authority tended to adopt tailor-made behavioural remedies. Finally, the paper remarks on the latest legislative developments in merger control in China.

For high-profile mergers which may cause anti-competitive effects, according to Article 29 of the Anti-Monopoly Law of the People’s Republic of China (“AML”),2 “restrictive conditions” (or remedies) can be imposed by the competition authority to reduce potential anti-competitive effects.3 Such decisions are typically called “conditional approvals.”

According to Article 3 of the Provisions on Imposing Restrictive Conditions on the Concentration of Undertakings (for Trial Implementation) (the “Remedy Provisions”), three types of remedies can be imposed to address potential adverse impacts on competition: (i) structural remedies, i.e. divestiture of tangible or intangible assets, or relevant interests or rights; (ii) behavioral remedies, i.e. opening networks or platforms, licensing key technologies (including patents, preparatory technologies or other intellectual property), or terminating exclusive agreements; and (iii) hybrid remedies, i.e. a combination of structural and behavioral remedies.

In terms of legislation, some new developments concerning the merger control should be noted, especially those in relation to conditional approvals. Specifically, on January 2, 2020, the State Administration for Market Regulation of People’s Republic of China (“SAMR”) released a draft amendment to the AML to solicit public comments (the “Draft AML Amendment”). Among the key proposed changes, there is a “stop-the-clock” clause. Article 30 would add new stop-the-clock rules by setting out three scenarios in which the passage of time would not count towards the review period. These three scenarios reflect practical necessities: the clock can stop (i) “upon application or consent by the notifying parties”; (ii) where “supplementary submission of documents and materials ” are required; and (iii) to facilitate “consultation in relation to proposals for restrictive conditions.” This could be a solution to the common issue whereby notifications are withdrawn and refiled in conditionally approved cases, where the statutory review period is usually not adequate for the SAMR and the notifying parties to negotiate remedies and for the SAMR to reach a final decision. However, more detailed criteria in this regard are required to prevent the stop-the-clock period from being extended indefinitely, which could increase legal uncertainty.

Another newly released draft regulation is the Interim Provisions on Review of Concentration of Undertakings (Exposure Draft) (the “Interim Provisions”). According to its Article 47, the divesting party must make a proposal to divest to a specific buyer, and the SAMR is allowed to require in its conditional approval decision that the divesting party not implement the concentration before the completion of the divestiture. In addition, Article 50 of the Interim Provisions provides that the SAMR must specify in the conditional approval decision whether the notifying party is required to engage a trustee, and set out any applicable procedures.

III. AN ANALYSIS OF AMB’S CONDITIONAL APPROVALS IN 2019

In 2019, there were five merger enforcement decisions resulting in conditional approvals, namely KLA-Tencor/Orbotech,4 Cargotec/TTS,5 II-VI Finisar,6 Garden Bio DSM7 and Novelis Aleris.8 Pure behavioral remedies were used in four of these (in which a hold-separate remedy was imposed in three), hybrid remedies (a combination of both divestitures and behavioral remedies) were used in one, while pure structural remedies (normally in form of divestures) were not used alone in any. Please refer to Table 1 below for a summary of the five conditionally approved cases. 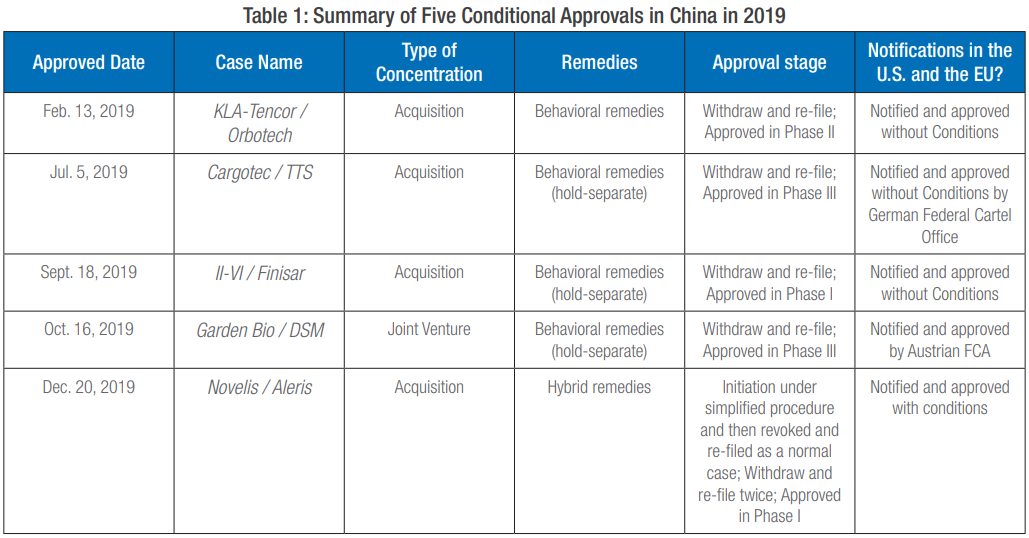 This table again demonstrates the long-lasting impression that the AMB prefers behavioral to pure structural remedies, which differs from the practice of its counterparts in the United States and the EU Commission. In addition, 2019 saw an increase in the use of hold-separate remedies. To sum up, with the five new conditional approvals, from 2008 to 2019, the number of cases in which pure behavioral remedies were used increased to 21, accounting for 47.7 percent of the 44 cases, which increased by 4.1 percent compared with 2018. Pure structural remedies and hybrid remedies were used in 11 and 12 cases, respectively. In other words, behavioral remedies were applied in 33 cases, representing 75 percent of all the conditionally approved cases in China.

Please refer to Table 2 below for a summary of remedy types used the 44 cases as of 2019 and a comparison with the statistics as of 2018.

Further analysis of the five conditional cases is provided below from both procedural and substantive perspectives.

A. Procedural Perspectives (including Comparison with 2018) 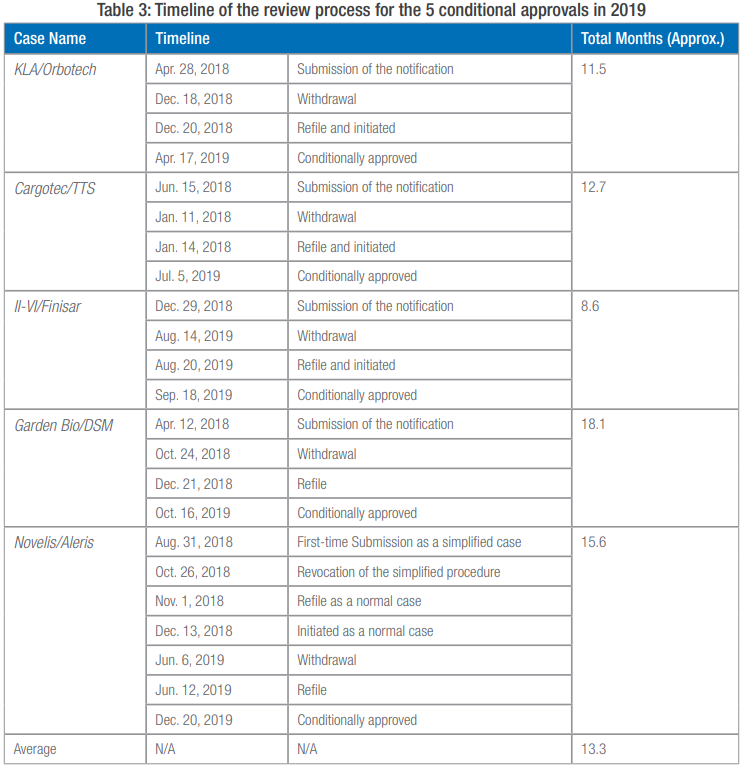 There are two notable takeaways from Table 3:

Second, in Novelis/Aleris, the authority took a particularly long time (3.4 months) to determine whether to initiate the review process compared with the other four cases with conditional approvals. In Novelis/Aleris, the period between the first submission and its withdrawal as a “normal” case was extremely long (i.e. about 10 months). According to the decision, the Novelis/Aleris notification was initially filed as a “simplified” case on August 31, 2018 but this notification was refused by the authority. The case then was then re-filed as a “normal” case and the review period was formally initiated on December 13, 2018. Novelis/Aleris illustrates the importance of correctly assessing whether a case qualifies for simplified treatment before submission.

Please see the more detailed timelines of the five conditional approvals in Table 4 below:

Based on the published decisions of the five conditional approvals in 2019, the following table summarizes the date of acceptance of the proposed remedy and the date of final approval for each case.

Once the proposed remedies are finally accepted by the authority, the internal approval procedure follows. The supervisor(s) of the case handler will review the internal merger filing report and assessment prepared by the case handler before the written approval is finally signed and issued. As illustrated by Table 5, the internal approval procedure takes 13.4 days on average. Compared with the conditional approvals in 2018, cases in 2019 took less time to obtain approval decisions, from the submission of the final proposed remedies (by contrast, in 2018, this internal approval period could last for months). In this respect, it is fair to say that the authority’s efficiency increased in 2019.

As to the types of remedies imposed in 2019, please refer to Table 7:

For more details of the behavioral remedies imposed in 2019, please refer to Table 8 below: 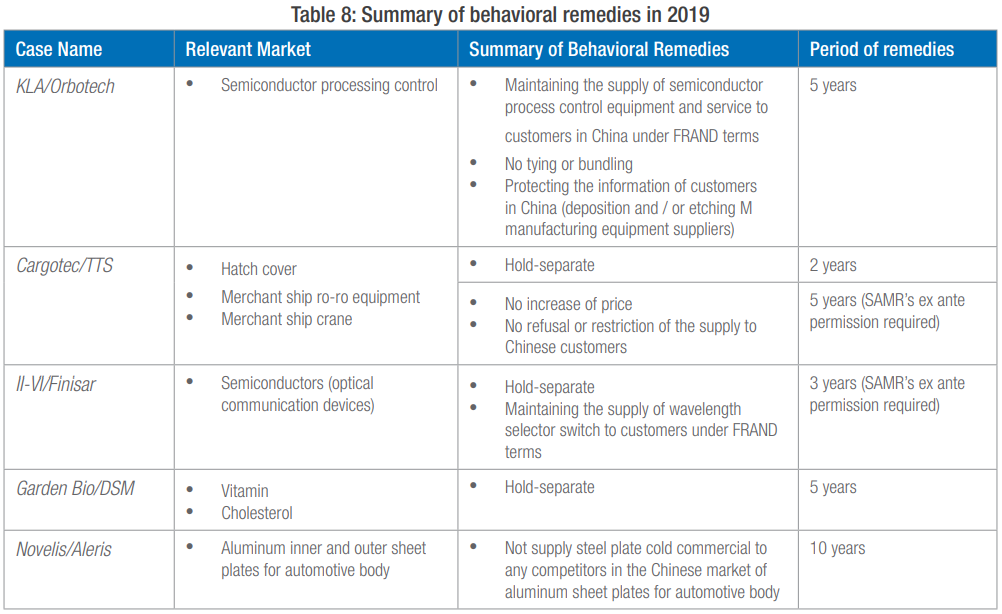 The behavioral remedies set out in Table 8 display the following features:

First, taking a closer look at the behavioral remedies imposed in 2019, there are two main types: hold-separate and supply maintenance. Of all the five conditional approvals, three contain a hold-separate remedy (i.e. Cargotec/TTS, II-VI/Finisar and Garden Bio/DSM), while three contain a supply maintenance remedy (i.e. KLA/Orbotech, Cargotec/TTS, and II-VI/Finisar). These two main remedy types suggest that the SAMR cares about maintenance of market competition following transactions, as well as the welfare of customers in China. For notifying part(ies), it is important to pay attention to potential concerns in relation to consumer welfare.

Second, it is also noteworthy that in Cargotec/TTS and II-VI/Finisar, the authority explicitly required that the undertaking concerned obtain the SAMR’s ex ante permission for the disapplication of the behavioral remedies imposed. This is not a new development. In the Essilor/Luxottica case in 2018, the SAMR also required the undertaking concerned to apply for ex ante permission to remove behavioural remedies.10 This type of requirement can increase the burden on the undertakings subject to behavioral remedies. On the other hand, in KLA/Orbotech, Cargotec/TTS, Garden Bio/DSM, and Novelis/Aleris, the authority agreed that the restrictive conditions could expire automatically when a given time limit expired (though did not do so fr the hold-separate remedies in KLA/Orbotech and Cargotec/TTS).

Third, although popular, behavioral remedies can in practice be burdensome both in terms of time and expense. Such remedies generate costs, including not only the fees for monitoring trustee services (which are borne by the company subject to the remedy), but also additional legal costs to ensure compliance. These costs can become even more pronounced depending on the length of the remedy period, which last for five or even 10 years (in Novelis/Aleris). Especially, in those cases where remedies cannot be lifted if SAMR disagrees, this may create significant burden and uncertainty for the post-closing entities. On the other hand, behavioral remedies do have their advantages. For instance, behavioral remedies at least maintain the integrity of an acquired business to the greatest possible extent.

2019 was another remarkable year in terms of merger control developments in China. From the legislative perspective, developments in 2019 may have significant impact on future merger control enforcement. The “stop-the-clock” clause proposed by the Draft AML Amendment may give the authority and undertakings concerned more time to process a transaction, but may also introduce legal uncertainty. In addition, the Interim Provisions set out procedural rules for conditional approval cases. Although the two pieces of legislation are not yet formally adopted, they are indicative of future trends in merger control in China.

From a procedural perspective, one of the most significant features of 2019 may be the long review periods. In particular, Garden Bio/ DSM took 18.1 months to obtain approval. Moreover, experience in 2019 underlines how important it is to correctly assess whether a transaction satisfies the criteria for simplified treatment before submission. In Novelis/Aleris, the notification was first filed as a simplified case on August 31, 2018 but later it was revoked by the SAMR. The case then was filed as a normal case and finally initiated on December 13, 2018, which took almost 3.4 months. In order to ensure a smooth review process and to avoid unnecessary delays, experienced local antitrust counsel can play an important role in the preparation and review process. They are familiar with the merger filing procedures and standards, and can help companies to make the right decision at every stage, including but not limited to applying for the right procedures, based on their understanding of the authority’s requirements and working style.

We suspect that Chinese merger control in 2020 will be consistent with the 2019 experience, which benefits legal certainty. For instance, we think the industries concerned in 2019 will likely still be the focus in 2020, and that behavioral remedies such as hold-separate obligations and supply maintenance will remain popular. Nevertheless, from a procedural perspective, if the “stop-the-clock” clause is adopted in the revised AML, the review process of merger control in China will be changed.

2 See Standing Committee of the National People’s Congress, Anti-Monopoly Law of the People’s Republic of China (中华人民共和国反垄断法) (Adopted on August 30, 2007, entered into force on August 1, 2008).

3 Ibid. Article 29. Since April 2018, the newly-established State Administration for Market Regulation of the P.R.C. (“SAMR”) is responsbile for merger review rather than the Ministry of Commerce of the P.R.C. (“MOFCOM”).

Mercedes-Benz Teams Up With Luminar For Self-Driving Tech

Mercedes-Benz Teams Up With Luminar For Self-Driving Tech