Jeff Bezos’ ownership of The Washington Post has complicated business for his much bigger company, Amazon, in Trump-era Washington, reported The New York Times.

Now the same thing could be happening in New Delhi under India’s prime minister, Narendra Modi, who has increasingly sought to rein in both the international news media and foreign technology companies.

Last week, a senior official of Mr. Modi’s governing Bharatiya Janata Party criticized The Post’s coverage of the country during a visit by Mr. Bezos to announce new investments in India, one of Amazon’s fastest-growing markets.

The official, Vijay Chauthaiwale, urged Mr. Bezos to return to Washington and “impart some wisdom” to Post employees about the bright prospects for India that Mr. Bezos was touting in New Delhi. 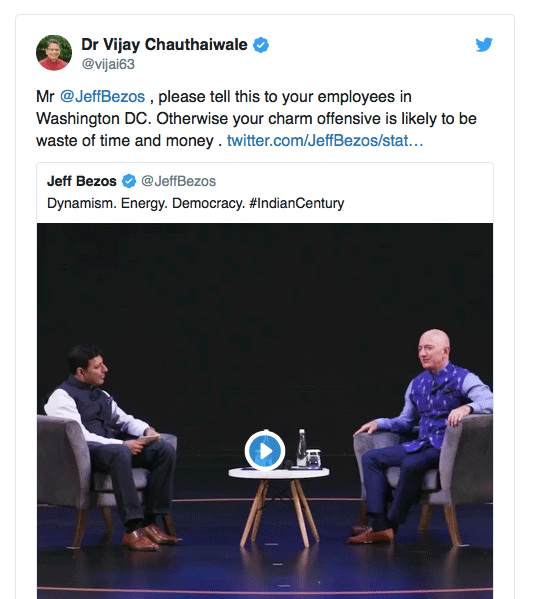 “Otherwise your charm offensive is likely to be waste of time and money,” Mr. Chauthaiwale wrote in a tweet on Thursday.

​On the same day, Mr. Modi’s commerce minister, Piyush Goyal, dismissed Mr. Bezos’ announcement of a fresh $1 billion investment to help small businesses in the country.“It is not as if they are doing a favor to India,” Mr. Goyal told reporters. He then referred to the antitrust investigation of Amazon and its chief rival that Indian regulators opened the day before Mr. Bezos arrived.