Abstract:   There are material regulatory risks associated with any combination of Broadcom and Qualcomm. Given the parties’ competitive positions in WiFi and RFFE products (among others), the complexity of complying with a divestiture demand because of the difficulty the parties will have separating these businesses and selling them to an acceptable buyer, and the real risk that agencies (e.g., China’s MOFCOM) may demand significant restrictions on Broadcom’s post-merger licensing and distribution practices, the transaction presents significant antitrust risk.

Based on our experience as former senior government officials and practitioners with significant cross-border antitrust merger review experience, we write to share the significant antitrust risks posed by Broadcom’s proposed takeover of Qualcomm.[1]

Broadcom’s February 9, 2018 proposed merger agreement states, in relevant part, that: (1) Broadcom agrees to use its “reasonable best efforts” to complete the process; (2) to that end, it is willing to divest Qualcomm’s network (but not mobile) WiFi and Radio Frequency Front-End (RFFE) assets or businesses (excluding integrated products such as Snapdragon) and any other Qualcomm assets, licenses, or other businesses so long as not material; and (3) Broadcom will pay Qualcomm a reverse break-up fee of $8 billion in the event that regulatory approval is not received, assuming that there has been no “material adverse effects” (MAEs) on Qualcomm’s businesses.

The proposed agreement further provides for the following limitations on Qualcomm during the period between signing and closing: (1) prohibitions on initiating litigation, including to enforce its intellectual property rights (IPRs) against infringers who refuse to pay; (2) prohibitions on entering into any license agreement or materially amending existing agreements; and (3) prohibitions on settling existing litigation without Broadcom’s consent. Based on public reports, we also understand that Broadcom has further stated that it is now willing to commit to additional divestitures, including its own connectivity businesses, but has not agreed to commit to accept conduct remedies such as prohibitions on bundling or tying products.[2]

Given these terms, shareholders should be aware of the following:

With respect to conduct remedies, there are countless examples showing that regulators can and do impose substantial conduct remedies, including those that could amount to an MAE, and that may not be merger-specific. These include:

The real risk posed by these types of remedies generally requires deal protection for shareholders, including a “hell-or-high-water clause” (i.e., do whatever is necessary to get the deal done), or at least defining the MAE provision so as to exclude remedies that may be required by antitrust regulators. Such protections ensure that a buyer cannot walk away from the deal at any point during or after a protracted regulatory review period, particularly given the likely disruption caused to targets (here, Qualcomm) during such a review period.

With respect to divestitures, antitrust agencies will require that any divestiture remedies fully replace the loss of Qualcomm’s competitive pressure in the market, i.e., any remedy must make competition “whole” in the sense that it must put another competitor in a position to compete as effectively against Broadcom as Qualcomm does today (and likely into the future). And, of course, any divestiture transaction would itself have to be reviewed for antitrust and national security issues.

Prior agency precedent makes it clear that agencies require divestiture buyers have the incentive and ability to compete immediately, and continue competing into the future.

In short, there are material regulatory risks associated with any combination of Broadcom and Qualcomm. In the United States, Europe, and China, in particular, this deal raises significant issues that will require a substantial amount of time and effort for global regulatory agencies to resolve. Given the parties’ competitive positions in WiFi and RFFE products (among others), the complexity of complying with a divestiture demand because of the difficulty the parties will have separating these businesses and selling them to an acceptable buyer, and the real risk that agencies (e.g., MOFCOM) may demand significant restrictions on Broadcom’s post-merger licensing and distribution practices, the transaction presents significant antitrust risk. 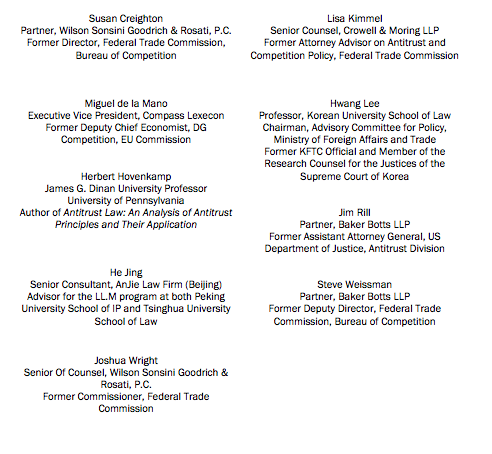 [1] Some of the signatories are affiliated with U.S.-based law firms that represent Qualcomm in policy or other matters. Professor Hwang Lee served as an expert for Qualcomm in unrelated Korea Fair Trade Commission matters.

[2] According to press: “In the meeting this week, Singapore-based Broadcom was willing to make certain divestitures to satisfy antitrust regulators, but was still resistant to ‘other commitments that could be expected’ to be required by government regulatory bodies, Qualcomm said.” Greg Roumeliotis & Diane Bartz, Qualcomm Says Open to More Deal Talks With Broadcom Following Meeting, US News (Feb. 16, 2018, 8:21 am), https://money.usnews.com/investing/news/articles/2018-02-16/qualcomm-says-open-to-talks-with-broadcom-for-better-offer. However, in its filing to the SEC yesterday, Broadcom reiterated its willingness to accept only those limited divestitures set forth in its original proposed merger agreement. Qualcomm Incorporated, Proxy Statement (filed by Broadcom Limited) (Schedule 14A Information) (Feb. 20, 2018).

Biden Administration And Amazon’s Bezos Face Off Over Inflation