One of the shortcomings of competition law enforcement is its perceived inability to redress market outcomes resulting from anti-competitive conduct.  This means that the future conduct of guilty firms may not be based on true “competition on the merits” but on the ill-gotten gains of anti-competitive conduct, which often becomes the benchmark for future market outcomes.  Traditionally, when  the South African Competition Commission (“Commission”) fines a firm found guilty of contravening the Competition Act 89 of 1998 (“Competition Act”), this penalty, which is primarily aimed at deterrence of future cartel conduct, is paid into the country’s fiscus.  The Commission’s role in this process generally ends there and the firms in question potentially continue enjoying the fruits of their illegal conduct.

This failure of an administrative penalty to address market outcomes was illustrated in the bread cartel case in South Africa, which was settled between 2007 and 2011. In that case, it was found that despite the Commission’s numerous interventions, the price of bread did not decrease post the uncovering of the cartel and the levying of fines on cartel participants (see the graph below). 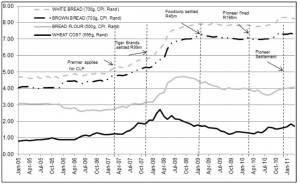 SEP Expert Group Report: A Look Into the IoT Future of...

First Steps of the New Merger Control Regime in Uruguay