The price of tickets for live music performances has increased markedly over the past few decades. While many explanations have been proffered by academics and the popular press, the effect of internet technologies on ticket prices might be underappreciated. I examine the market for concert tickets through the lens of academic literature on ecommerce and discuss how some of the findings therein may be relevant.

Rapid increases in the prices of concert tickets over the past couple of decades have not gone unnoticed, by the popular press,2 by academic economists, and especially not by the concert-going public. In a 2013 address at the Rock and Roll Hall of Fame, economist Alan Krueger offered the following documentation: 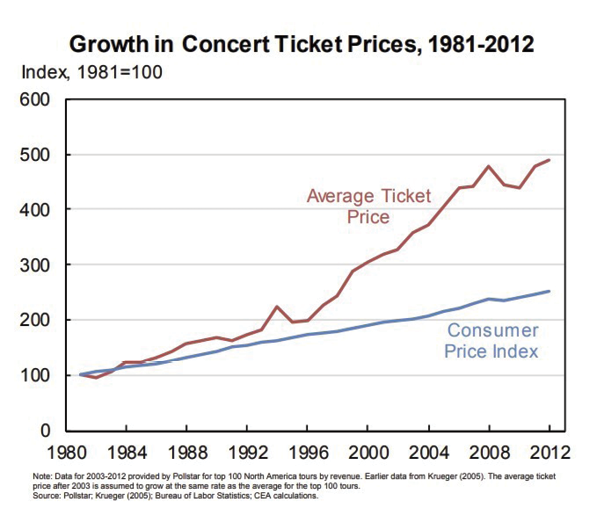 (Ticket price increases, by the way, have continued to outstrip inflation since 2013.) Connolly & Krueger (2005) discussed a number of factors behind this marked increase, and other commentators have added their two cents. One of the leading explanations has been the demographic shift in the concert-going public: the “graying” of rock and roll. High-income 50- and 60-year-olds were rarely attending big-name rock and pop concerts in the 1970’s. Today, they are a large fraction of the rock-concert-going population. Some commentators have also pointed a finger to the consolidation in the markets for promoters, ticket brokers, ticket sales platforms, and venues. In fact, Live Nation, which merged wi