In a recent notice requesting public comment on potential changes to merger enforcement, including revisions to the Horizontal Merger Guidelines and Vertical Merger Guidelines, DOJ and FTC (collectively, the “Agencies”) leaders assert that mergers have caused markets to become more concentrated and less competitive.1 To remedy this perceived problem, the notice requests comment on “whether concentration thresholds should be adjusted to improve the efficiency and effectiveness of enforcement” and “[h]ow should the guidelines analyze whether there is a ‘trend toward concentration in the industry,’ and what impact should such a trend have on the analysis of an individual transaction?” However, recent empirical research undercuts the basic premise underlying these inquiries, demonstrating (i) there is scant evidence of a broad increase in market concentration, and (ii) to the extent some nonetheless perceive such a trend, it may be explained by the trend toward defining narrower markets that have fewer competitors and higher market shares.2

Scholars and policymakers advancing a “deconcentration” narrative have pointed to a handful of studies to support their claim.3 Of these, the most oft-cited is the study issued by the White House Council of Economic Advisers (“CEA”) during the Obama Administration, which found that concentration—as measured by the combined market share of the fifty largest firms in each industry (the CR50)—increased modestly between 1997 and 2012.4 Proponents like current FTC Chair Lina Khan argue that this provides clear evidence that market concentration in the United States is now a “systemic” problem.5

Unfortunately, the CEA study is a poor substitute for detailed antitrust analysis for three reasons. First, it evaluates changes in industrial concentration – concentration with an industry as defined by the U.S. Census Bureau – rather than market concentration in a properly defined antitrust market.6 Second, as discussed above, it measures concentration using the CR50, which to our knowledge the courts and Agencies have rarely, if ever used and is, from an economic perspective, far too broad to be useful for assessing changes in competitive conditions. For example, the original 1968 DOJ Merger Guidelines used a four-firm concentration ratio.7 Third, rather than using the most granular industry categorizations available in the Census data, the CEA study inexplicably uses broad industry sectors which have no connection to economic markets. Furthermore, the CEA study was conducted prior to the release of the most recent Economic Census data, the 2017 Economic Census, and thus does not capture the most recent trends in concentration.

Figure 1: Trends in Industrial Concentration for the U.S. Economy and the U.S. Manufacturing Sector, 2002-2017 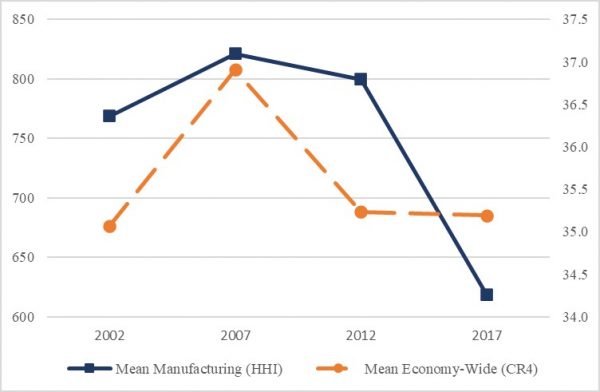 It is useful to specifically examine trends in concentration in the U.S. manufacturing sector and in the economy as a whole because the Census data measures concentration in manufacturing using the Herfindahl-Hirschman Index (HHI), whereas the best measure of concentration available for the broader economy in the Census data is the four-firm concentration ratio (CR4). However, regardless of how concentration is measured, the general trend is similar. For manufacturing, HHI has been declining since 2002 with a decrease of 150 points from 769 to 619. For the economy as a whole, CR4 declined by 1.7 percentage points from 2007 to 2017 As a result of this decline, the most recent CR4 in 2017 is approximately equal to the CR4 in 2002.
As a result of this downward trend in concentration, the U.S. economy is no more concentrated today than it was in 2002 despite the alleged laxity of merger enforcement under the Bush and Obama Administrations and the rise of “Big Tech.” Furthermore, rather than high levels of concentration being systemic, the data show that more concentrated industries tend to become less concentrated over time, while less concentrated industries tend to become more concentrated over time, suggesting that trends in concentration are influenced by transient economic shocks that dissipate in future periods. Other analyses reach similar conclusions, demonstrating the robustness of the findings.9

Why then does the current leadership of the Agencies believe that concentration is increasing? The empirical evidence suggests it may be a product of changes in the way the Agencies define the market and measure concentration, not any actual change in the real economy. In research published last year in the Antitrust Law Journal of the American Bar Association, FTC Commissioner Christine Wilson and one of the authors found that, in practice and on average, antitrust enforcers and courts define narrower markets today than they did when the foundational merger cases were decided (and the first Merger Guidelines were issued) in the 1960s and 1970s.10 The table below reports the basic statistics.

Two examples illustrate the trend. In banking, during the 1960s and 1970s the Supreme Court consistently found a product market for “the cluster of products (various kinds of credit) and services (such as checking accounts and trust administration) denoted by the term ‘commercial banking.’”11 But in the 1998 CoreStates merger, which involved the same bank (Philadelphia National) and same area (Philadelphia), the DOJ instead defined separate product markets for savings, checking, and trust accounts, as well as several separate markets for different kinds of commercial loans.12 The DOJ also used these narrower markets in its 2020 review of the merger of BB&T and SunTrust.13 The same dynamic occurred in energy mergers: in the 1970s case United States v. General Dynamics Corp., the district court found (and the Supreme Court assumed for purposes of the appeal) an “energy market” that encompassed fuel sources used to generate electricity, including coal, natural gas, oil, uranium, and “other forms of energy.”14 But in a 2020 decision in FTC v. Peabody Energy Co., the district court defined both a broad energy market and “an economically significant submarket” consisting only of coal mined in the Southern Powder River Basin of Wyoming.15 It then found the merger presumptively unlawful based on market shares in the latter (narrow) market.16

Narrower markets are generally viewed as facilitating stronger antitrust enforcement because they typically result in fewer in-market competitors, higher market shares, and higher HHIs. As the DOJ itself once put it, “[f]requently, the government alleges narrow markets, the defendant describes broader markets, and the court must choose between the competing approaches.”17 Thus, far from proving that antitrust enforcement has been too lax, the evidence indicates that antitrust enforcement has become more stringent, at least in the way enforcers and courts define markets and apply the associated presumptions and thresholds.

** Associate Director, NERA Economic Consulting; Visiting Fellow, American Enterprise Institute; Adjunct Professor, Antonin Scalia Law School, George Mason University. The opinions we express here are solely our own and may not necessarily reflect the views of the institutions with which we are affiliated. Parts of this column were adapted from a comment one of the authors submitted on the record in response to the Agencies’ Request for Information on Merger Enforcement, Docket FTC 2022-0003-0001.

4 COUNCIL OF ECON. ADVISERS, BENEFITS OF COMPETITION AND INDICATORS OF MARKET POWER (2016), https://obamawhitehouse.archives.gov/sites/default/files/page/files/20160414_cea_competition_issue_brief.pdf.

6 See e.g., Carl Shapiro, Antitrust in a Time of Populism, 16 INT’L J. INDUS. ORG. 714, 728 (2018) (“[S]imply as a matter of measurement, the Economic Census data that are being used to measure trends in concentration do not allow one to measure concentration in relevant antitrust markets, i.e., for the products and locations over which competition actually occurs.”)

8 Kulick & Card, supra note 2. The analysis begins in 2002 because the granular data necessary to accurately assess trends in concentration are not publicly available from the Census in electronic form for the 1997 Economic Census.

12 Compare Fed. Res. Sys., In re First Union Corp., Order Approving the Merger of Bank Holding Companies at 8 (Apr. 13, 1998) (“The Board and the courts traditionally have recognized that the appropriate product market for evaluating bank mergers and acquisitions is the cluster of products (various kinds of credit) and services (such as checking accounts and trust administration) offered by banking institutions.” (citing, inter alia, Philadelphia National Bank)), with Robert Kramer, Chief, Lit. II Section, “Mega-Mergers” in the Banking Industry: Address before the Am. Bar Ass’n 3 (Apr. 14, 1999), https://www.justice.gov/atr/speech/mega-mergers-banking-industry (explaining that, in CoreStates-First Union, the DOJ rejects the cluster product market approach used in Philadelphia National Bank because “[w]e view banks as multi-product firms with different products that consumers do not find to be good substitutes for one another” and that these narrower product markets have “ramifications for geographic market definition,” which is also narrower than in PNB).

13 U.S. Dep’t of Justice, Antitrust Div., 2020 Division Update, at 19 (June 2020), https://www.justice.gov/file/1280196/download (“In several cases [including SunTrust/BB&T], Division staff concluded that the relevant antitrust market was narrower than the banking markets defined by the banking regulators, which underscored the need for a robust remedy.”).

The Criminal Prosecution of Hardcore Cartels in the USA and the...

A Review of the Development of SEP-Related Disputes in China and...

The Indivisibility of Telecommunications Networks: A Possible Explanation for Past and...