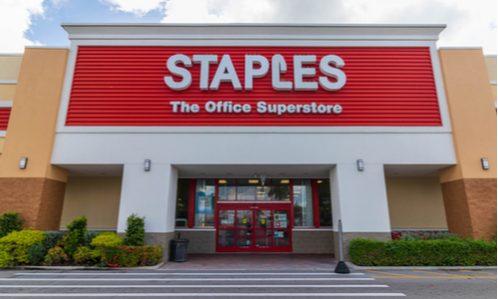 Staples is once again proposing to buy rival Office Depot in a US$2.1 billion deal, five years after the US government squashed their prior merger agreement, reported The Wall Street Journal.

The US$40-per-share offer price for Office Depot’s parent company, ODP Corp., is a roughly 60% premium over its average closing price for the last 90 trading days. The all-cash transaction, according to Staples, is a “compelling value proposition” and is “superior to the intrinsic, standalone value” of Office Depot.

Staples said it’s “prepared to take all necessary measures” to get the merger approved by the Federal Trade Commission, which said in 2015 that the combination would give the combined companies too large a chunk of the office supply retail market and would violate antitrust law.

To avoid antitrust scrutiny, Staples proposed selling its IT management company CompuCom or its business-to-business unit. Doing that might lead to Staples increase its proposal price, it stated. The regulatory process could take about six months, the company estimated, and Staples is urging ODP’s board to “instruct management to cooperate with the regulatory authorities as soon as possible.”

China Joins The Push To Rein In Tech Giants