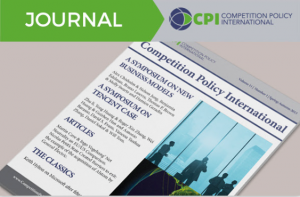 Letter From the Editor

Keith N. Hylton, March 20, 2016 United States v. Microsoft Corp. (Microsoft III) is now fifteen years old, and that I would write such a long introduction to a reprint of significant portions from the opinion is a sign its significance has not died out. Just the opposite, I think it will become more significant.

A SYMPOSIUM ON NEW BUSINESS MODELS

Platform regulation — ex-ante versus ex-post intervention: evolving our antitrust tools and practices to meet the challenges of the digital economy

The rapid change in the economic environment, in particular the growth of the digital economy, poses challenges for competition authorities and policymakers alike: what are the key considerations that should inform the approach to intervention in such a fast moving sector?

New business models and competition enforcement: must we ride the tide of change?

Uber and the Rule of Law: Should Spontaneous Liberalization Be Applauded or Criticized?

While Uber is able to operate legally in a growing number of countries and cities, regulatory approval has proved to be elusive in other jurisdictions. Yet, in a number of regions or cities Uber decided to launch its services despite the ab

Data Is Abundant But Is It Accessible To Researchers?