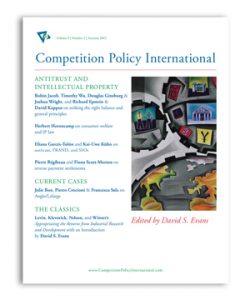 Our Autumn 2007 issue of Competition Policy International features a truly international collection of antitrust experts from the Asia-Pacific region, the European Union, and the United States. We begin with a report from the United States, where the Supreme Court rendered four antitrust decisions during the 2006-2007 Term. Like the other nine antitrust decisions issued since 1997, the Court ruled for the defendants and for the proposition that the scope of the antitrust laws should be limited in some way.

The Antimonopoly Law in China: Where Do We Stand?

A New Kid on the Block: Korean Competition Law,...

Competition Law Takes Off in Singapore: An Analysis of...

Consumer Surplus as the Appropriate Standard for Antitrust Enforcement

Economic Analysis of Competition Practices in the EU and...

European Court of Justice Upholds Judgment of the European...

The Roberts Court and the Chicago School of Antitrust:...